Panning for Gold in Hampton’s History

“There’s gold in them thar hills,”  as the saying goes. So, too, with historical research, in which the paydirt is information. Like panning for gold, research requires the patience to scour objects for hours on end “looking for color” – a gold mining term for determining the presence of oro. Instead of bending over a swirling pan of dirt in an icy creek, researchers stare into computer screens and hunch over a miscellany of old documents. To extend the metaphor, these miners of information sometimes get dust, sometimes flecks, while other times they get lucky and score with a big, shiny nugget.

Right now I’m researching Hampton’s “Argonauts” – those men who went to California during the Gold Rush of 1849 and the Klondike Gold Rush fifty years later. I expected at the outset to find one or two names, but the list is growing longer as details begin to accumulate. What I didn’t expect to find, however, was a Hampton woman, one who had gone ’round the Horn to California to boot! Her letter, written from San Francisco to her parents in Hampton, was printed in a May 1849 issue of the Exeter Newsletter (reproduced below).

Thanks to the Internet, I was able to parlay this serendipitous find into a goldmine of information about her life, her historic journey to California, and the family she left behind in Hampton. Her name was Caroline Augusta Perkins Joyce Jackson, born in 1825 to John and Caroline Harriman Perkins. Caroline Sr.’s father was John Harriman, an early pastor of Hampton’s Baptist Church, said to have been one-half Penobscot Indian and the founder of the New Light Christian Baptists.

Young Caroline, however, became enamored with the Church of Latter Day Saints – the Mormons – and against her parents’ wishes was baptized into that faith. In Boston she was known as the “Mormon nightingale” for her singing talent. She married John Joyce of New Brunswick and in 1844 gave birth to a daughter, Augusta. In 1846 she and John paid $150 to sail from New York with other Mormons on the ship Brooklyn, headed for upper California.

Map of the voyage of the Brooklyn (origin unknown).

The group planned to rendezvous there with the main body of Mormons traveling overland from Nauvoo, Illinois (the meet-up didn’t go off as planned, but that’s another story). The voyage of the Brooklyn is historically significant in that it is (as far as is known) the first colonist ship to carry women and children around the Horn to California.

Of the 234 passengers, about 60 were women and almost half were children. The six month voyage, which included a stop in Hawaii, was challenging—with all those kids, how could it be anything else?—storms, deaths, foul water, insect-infested food, days of sweltering heat with no wind to fill the sails.

The ship arrived at Yerba Buena (San Francisco) at the end of July 1846. The next year Caroline gave birth to Helen, her second and last child. The pioneering life in California was a hard one but the discovery of gold improved the Joyces’ fortunes tremendously. Although he had grown wealthy, John Joyce’s “apostasy” ruined the marriage and he and Caroline divorced.

At some point Caroline was visited by her father and brother John from Hampton. By 1860 she was living in San Bernardino where she married 52-year-old Colonel Alden Apollos Jackson, a lawyer and veteran of the Mexican War. By 1867 the Jacksons had settled in Utah Territory.

According to their shared headstone, Alden died that year and Caroline died in 1876, but Caroline’s daughter Augusta wrote that they had died within five weeks of each other in 1876. They are buried in St. George, UT; their gravesite has been fitted with a modern headstone that features a round “Ship Brooklyn Pioneer” plague under Carolyn’s name. Shortly before she died Caroline penned a memoir, which her daughter Augusta, a poet, writer, and plural wife, published in a book titled “The Representative Women of Deseret.”

Caroline’s letter, transcribed from the May 21, 1849 issue of the Exeter Newsletter  San Francisco, Dec. 3, 1848  Dear Parents – We are comfortably situated in our far western home, although we should like to have you all with us, and I think the boys had better embrace the first opportunity to come out here, as there is every chance for them to make a fortune, and they are as safe to be trusted on a voyage as I was certainly.

My husband has been in the gold mines and in four months has dug out two thousand dollars’ worth of gold which is but a small sum in comparison to the luck of some who have worked there. Any boy twelve years old can get from one to three ounces of gold – pure gold, in a day. And who would not leave home for a while and risk the ocean waves, rather than work for years?

The town of San Francisco is improving fast and looks quite like home. Lots of land which could be bought for fifteen dollars when we came here, two years ago, sell now from one to six thousand dollars. We shall try and buy a farm in the Country this coming year: so if you will come out you will have a home ready. This is to be a great farming country as produce is very high at present. Every man is busy digging gold and of course farming is neglected, so long as a man can make from fifty to a hundred dollars a day.

I would advise you to come by land in case you conclude to come, but by all means send all your furniture by water, well packed and marked; and do not leave home as I did, with nothing to keep house with. I think, however, you had better remain in the States and let the oldest boys come to California. The journey either way is tedious—and I shall either come home or send you money to make you comfortable without working any more, as you have been obliged to do all your life.

I can assure you it is very hard for me to see plenty of gold around and know that you are toiling every day for a scanty subsistence. I know my oldest brothers at home could earn in one year sufficient to enable you to live independent all your life; and I want the youngest boys to go to school, as there are no schools in this place, and no prospect of any so long as a man can get from fifty to an hundred dollars a day in the mines

I may take a start and come home in the spring, for I do not mind a journey now as I once did. My husband will stay here, as he intends going into the mines as soon as the rain is over.  Your affectionate daughter, Caroline  P.S. You will perceive that I have sent you a small specimen of the gold as dug from the mine.

Who knows? Maybe this letter inspired the Hampton ’49ers, men like Charles M. Perkins, Edwin Johnson Hobbs, Nathaniel Johnson, and the Lamprey and Dearborn boys, to pack up their belongings and head to California. Gold, indeed! 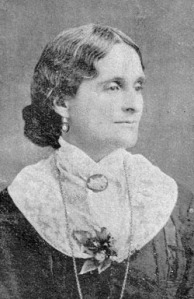 3 responses to “Panning for Gold in Hampton’s History”

About the Tuck Museum

The Tuck Museum, named for its main benefactor Edward Tuck, opened as a single building in 1925. Since then the museum has expanded into five special interest museums - the main hall, farm museum, firefighting museum, beach cottage and schoolhouse - all amply illustrating Hampton's past as a classic New England town, farming and fishing community, and seaside resort.

The museum is operated by the private, non-profit Hampton Historical Society, and is located at 40 Park Avenue, Hampton, New Hampshire, on the historic meeting house green.

Hours are Sunday-Wednesday-Friday, 1-4 p.m. or by special appointment.

In 2015 the Hampton Historical Society expanded to an offsite location to house its collections and support research-related activities.

Bloggers at History Happens are Cheryl Lassiter, author of The Mark of Goody Cole (lassitergang.com) and Betty Moore, Executive Director of the Tuck Museum.